Santa Clara County District Attorney Jeffrey F. Rosen announced today that Benjamin Altadonna, D.C., a Danville, California chiropractor and marketing consultant, has been ordered to pay $1,125,000.00 to settle a multi-jurisdictional prosecution arising out of his role in a nationwide, health care marketing fraud.The settlement ends a civil suit that began in 2010.

The Santa Clara County District Attorney, along with the District Attorneys of Alameda, Contra Costa, Marin, Monterey, Napa, Orange, Santa Cruz, Shasta, Solano, and Sonoma counties had filed a civil lawsuit in 2010 to enjoin Altadonna from engaging in false and misleading advertising, and unfair business practices relating to the marketing of a healthcare device known as the DRX-9000. The DRX-9000 was a spinal traction device. The complaint alleged that Altadonna, and his company, Altadonna Communications, Inc., falsely promoted the DRX-9000 as “patented,” “breakthrough medical technology,” “approved by the FDA,” and “developed by NASA.All of these claims were false. The DRX-9000 was merely a motorized traction device for the treatment of low back pain.

District Attorney Rosen stated: “This type of partnership with other District Attorneys will continue so that consumers throughout California will be protected and shielded from false advertising, especially regarding health practices.”

The District Attorneys’ investigation revealed that Altadonna received commissions from the manufacturer of the DRX-9000 to sell the device to health care professionals. Altadonna created and sold “professional practice building” products to healthcare professionals. He used the DRX-9000 as a centerpiece for his professional clients and taught them how to pressure patients to commit to advance purchases of thousands of dollars worth of treatments on the DRX-9000.Altadonna’s marketing materials targeted a vulnerable class of patients including those suffering from chronic, severe back pain and the elderly.

The final judgment, signed on March 20, 2012 by the Honorable Judge Steven Brick, permanently enjoins Dr. Altadonna from violating or assisting others in violating California’s health care marketing laws.In addition to the payment of $1,125,000.00, the settlement requires that Benjamin Altadonna comply with strict injunctive terms to prevent any future unfair or deceptive practices.

A picture of the device from the internet: 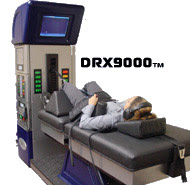