The Murder of Karen Stitt 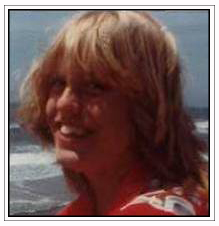 Karen Stitt was the new girl in town, a spunky Pittsburgh, Pa. transplant who quickly eased into the social life of Palo Alto High and negotiated the El Camino Real bus routes to and from her boyfriend’s in Sunnyvale like a native.

Sept. 4, 1982 was a Saturday and Karen and her boyfriend were hanging out late, playing some video games at a 7-Eleven. Toward midnight they wandered over toward Golfland, a popular putt-putt course. Around 12:30 a.m., Karen’s boyfriend dropped her off near a bus stop at the corner of El Camino Real and South Wolfe Road. She would grab the 22 back to Palo Alto and her father’s house.

There, snatched from the stretch of roadway choked with cruising cars, cluttered with restaurants and bars - the teenager, wearing a leather jacket, a striped shirt, pants and her boyfriend’s baseball hat with a Rush rock band insignia, disappeared.

A delivery man found her the next day. Thrown over a four-foot wall near the now-gone Honey Bee Restaurant, Karen’s naked body was bound with her own clothing. The hat lay nearby. She had been stabbed more than 60 times.

The possible importance of a number of clues has lingered over the years. A machinist working late that night noticed an unusual and out-of-place truck.  It was white, an old-fashioned panel truck with a stripe along its side. There was a rectangular sticker on its bumper. It was parked near where Karen’s body was later found. Its parking lights were on.

Assistant Deputy District Attorney Marc Buller and the Sunnyvale Department of Public Safety are asking anyone who recalls that truck or anything that may shed light on Karen's horrific murder to contact them. Even a seemingly insignificant piece of information, not collected at the time, may be vital.

If you have any information at all, please call District Attorney Investigator Michael Brown at 408-808-3760 or Sunnyvale Department of Public Safety Detective Joe Lockwood at 408-730-7134.