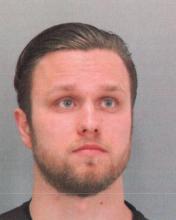 A South Bay massage therapist was convicted late last month of committing sexual battery against a client at a Campbell spa.

Richard Wayne Slate, 28, of San Jose, was found guilty of the misdemeanor charge after a jury trial on three alleged batteries at two separate spas.

Slate’s sentencing before the Hon. Elizabeth C. Peterson is at 1:30 p.m., January 2, 2018 in Department 52 of the Hall of Justice in San Jose. The prosecution is asking for the maximum sentence - a year in jail. Slate will be required to register as a sex offender.

“This man utilized his position of power to surreptitiously sexually assault his clients,” prosecutor Hugo Meza said. “He would have gotten away with it but for these brave women.”

Slate was charged with sexual battery against three women, two of them clients of his previous employer, Burke Williams in San Jose. The jury found him guilty of the charge against one of Slate’s Campbell clients.

That incident happened on March 1, 2016, when the 32-year-old victim visited Elements Massage. Slate sexually touched the victim without consent numerous times during the massage.

The victim, in shock, initially did not say anything. After the massage, the victim confronted Slate and he apologized. When the victim told the receptionist what occurred, police were called and he was arrested.

If anyone else has been victimized by Slate, who lost his massage license after the Campbell incident, please call Santa Clara County District Attorney Lt. Investigator Ray Hernandez at (408) 792-2816.