Skip to main content
NEWS RELEASE   FROM:
Jeffrey F. Rosen, District AttorneyCONTACT PERSON:
Tom Flattery, Deputy District Attorney
High Tech Unit
(408) 792-2542   For release on March 8, 2011
TWO SOUTHERN CALIFORNIA MEN CHARGED WITH PLACING CREDIT CARD SKIMMERS INSIDE MOUNTAIN VIEW GAS PUMPS   Boris Tumasyan, 24 years-old and Sarkis Sarkisyan, 23 years-old from Glendale, CA are charged in an eight count felony complaint alleging Conspiracy, Altering a Computer and Acquiring Credit Card Information with the intent to defraud. They were arraigned on January 18, 2011 in the Santa Clara County Superior Court, Palo Alto Courthouse.   On December 6, 2010, a Mountain View gas station attendant called the police after finding a small electronic device attached to the circuit board inside a gas pump. Mountain View police fitted the pump with an alarm that would signal when the pump was opened again if suspects tried to retrieve the device. Tumasyan and Sarkisyan were arrested on December 17, 2010 after the alarm was triggered. Officers searched their van and found keys that opened the gas pump and address information for several other area gas stations.   Further investigation by REACT – a Bay Area high-technology and identity theft task force – found six identical skimmers hidden inside gas pumps at five locations in Mountain View and Los Altos. REACT conducted a forensic examination of those skimmers and found over 3600 individual credit card numbers.   This type of scheme is especially difficult to detect because the skimmer is added to the circuit board inside the pump. There is nothing a customer could see from the outside that could alert them to the fact that a pump has been compromised. The scheme is also difficult to combat because many gas stations use pumps that can be opened with the same key. This type of scam has become an increasing problem with a dozen identical skimming devices recovered from gas stations throughout the bay over the past year. Law enforcement must rely on individual gas station managers to conduct regular checks of their pumps and notify police if they find anything unusual.   Tumasyan and Sarkisyan are both free on bail. They are due back in court on April 14, 2011. If convicted of all counts, they face a maximum sentence of seven years, eight months prison. 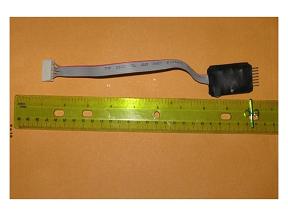