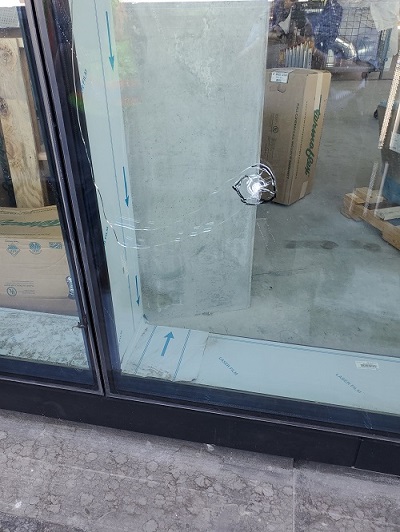 The Santa Clara County District Attorney’s Office has joined with other victims to offer up to a $20,000 reward for the arrest and conviction of the person who has been firing ball bearings into windows along the Guadalupe Freeway.

Although no one has been reported hurt, damage to the windows is estimated at more than $500,000. Residences, companies, and agencies have been hit. The District Attorney’s Crime Lab has been struck eight times. Also struck were the SAP Center and the San Jose Museum of Art. In one case, a terrified woman in her car had her windows blown out.

“We are asking for the public’s help to stop this destructive and dangerous spree,” District Attorney Jeff Rosen said. “This is not just property damage. People live and work behind those windows.”

Throughout 2021, residential and commercial windows have been targeted at least 20 times along the State Route 87 corridor, which passes by the San Jose International Airport and runs through the heart of downtown San Jose.

Investigators believe the suspect or suspects are using some type of a slingshot to fire the metal bearings at a potentially lethal speed.

If you have information about this crime you can submit anonymous crime tip information using Silicon Valley Crime Stoppers P3TIPS mobile app, by calling the tip line at (408) 947-STOP, or online at www.svcrimestoppers.org. If the information you submit leads to an arrest you are eligible for the reward.

The reward money is funded by a community driven partnership with the Silicon Valley Crime Stoppers.